She’s one of a kind- a silkstone body with a vintage head because the silkstone bodies are lovely… and every one of them looks snooty and horrible in the face.

Every fashion doll needs a wardrobe- this is Nancy’s. It’s made for an 18″ doll but I modified it and added a shoe rack and a hat shelf as well as a second hanging row of clothes. I lined the drawers in paper to keep the wood from staining anything. If it looks familiar, it should- it’s the rest of the paper I got for end papers for Harry Potter.

Her jewelry box. She has earrings but not pierced ears… I’m debating if I should pierce her ears.

Teddy, petticoat, hose and shoes from High Tea and Savories 2006 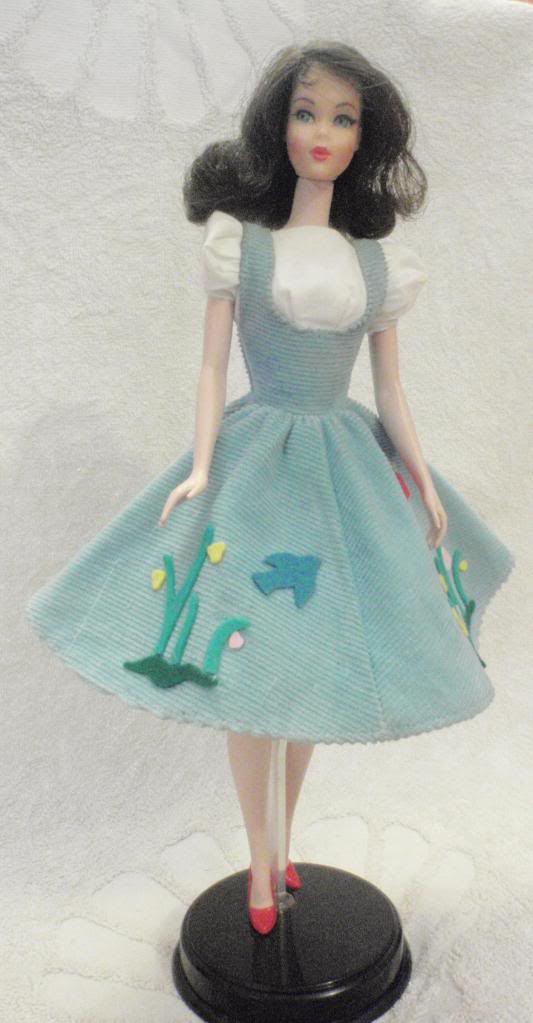 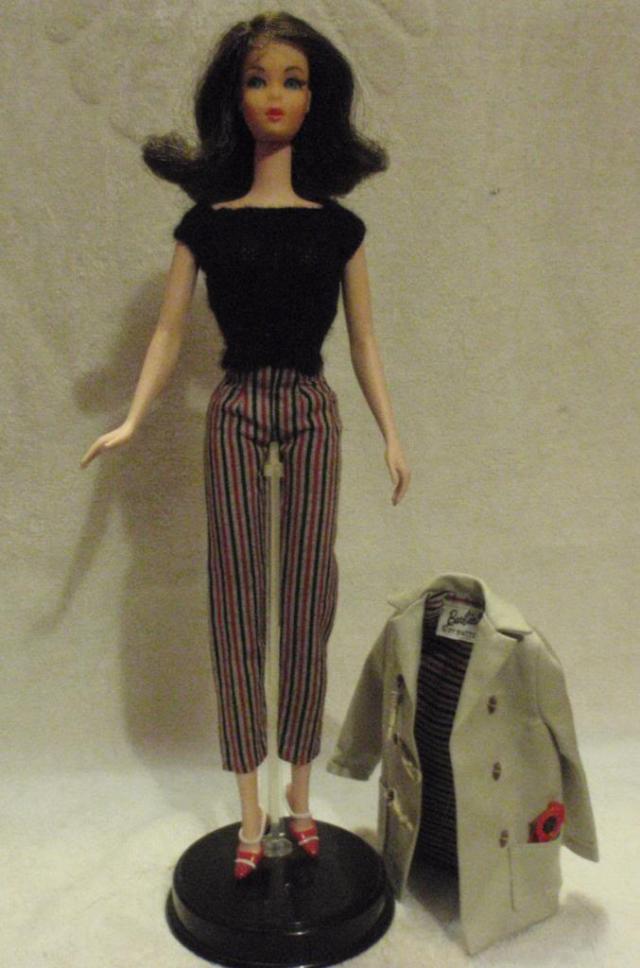 Open Road #985 1961
The sweater is a black Pak sweater because I thought it was cuter this way and I changed the shoes… who goes riding (or driving) in slides?

County Fair #1603 1964
The skirt is one I made because I like this fabric a lot more than I do the Mattel floral used for this and the handbag is from the Mod era… because really, are you going to take a clutch to the fair or one that leaves your hands free?

Beau Time #1651 1966
This is a reproduction I made of a vintage fashion- I even found the same plaid in silk! I wouldn’t go to the trouble except that it’s so popular that it’s crazy expensive to buy an original. 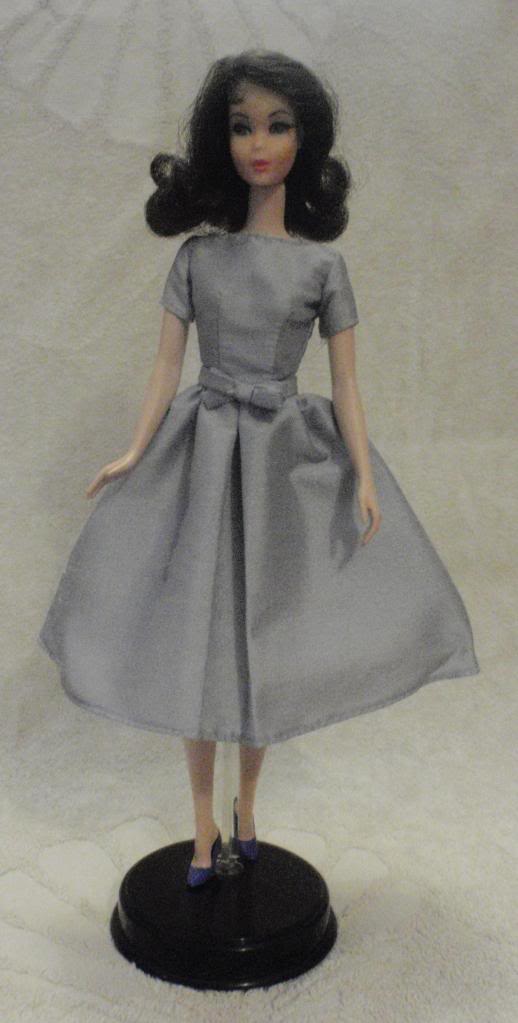 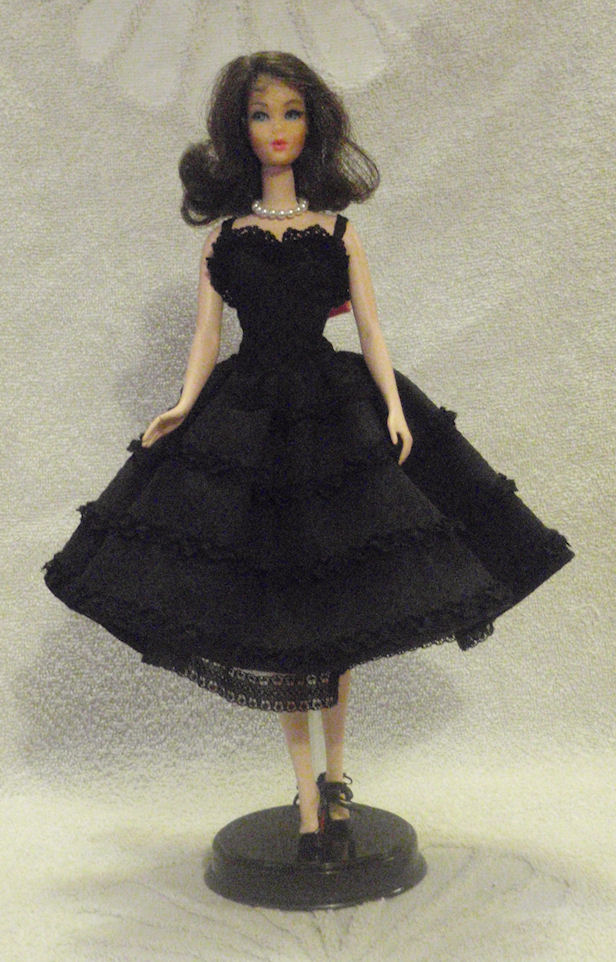 Mon Cheri #551 by Dressmaker Details Couture 2009
Emily says this dress reminds her of the dress in Princess Diaries 2- complete with the bracelet that slings off. I say it’s always all about the red dress. Just think about it- practically every movie that you see, if there’s a “special” dress, it’s either black or red. There’s the aforementioned Princess Diaries and Pretty Woman… and of course, the Matrix. 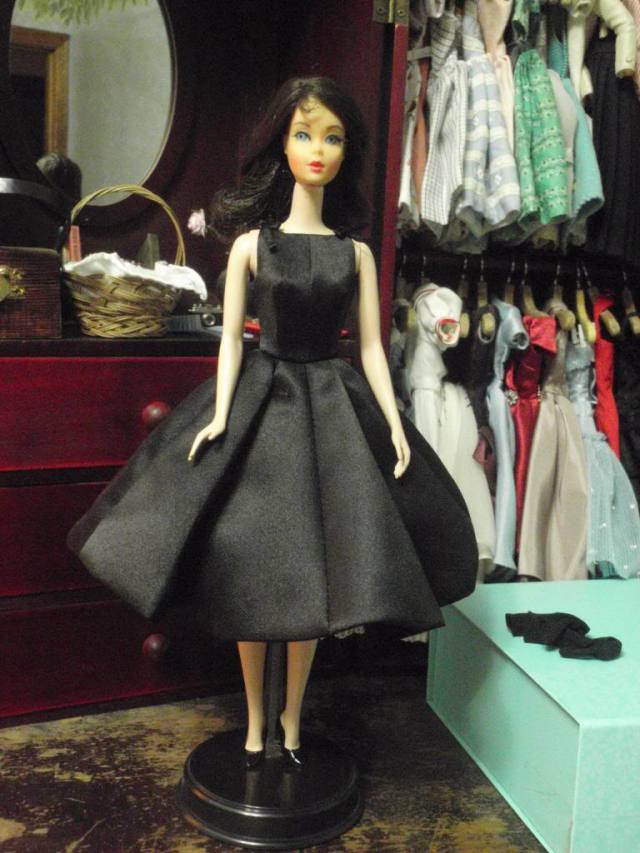 Preliminary picture for “Cocktails at 5” outfit. I’m not sure of the shoes and she needs elbow length black gloves and black hose. I don’t like the hat, it looks like a graduation cap on her so no hat or at least not that hat. 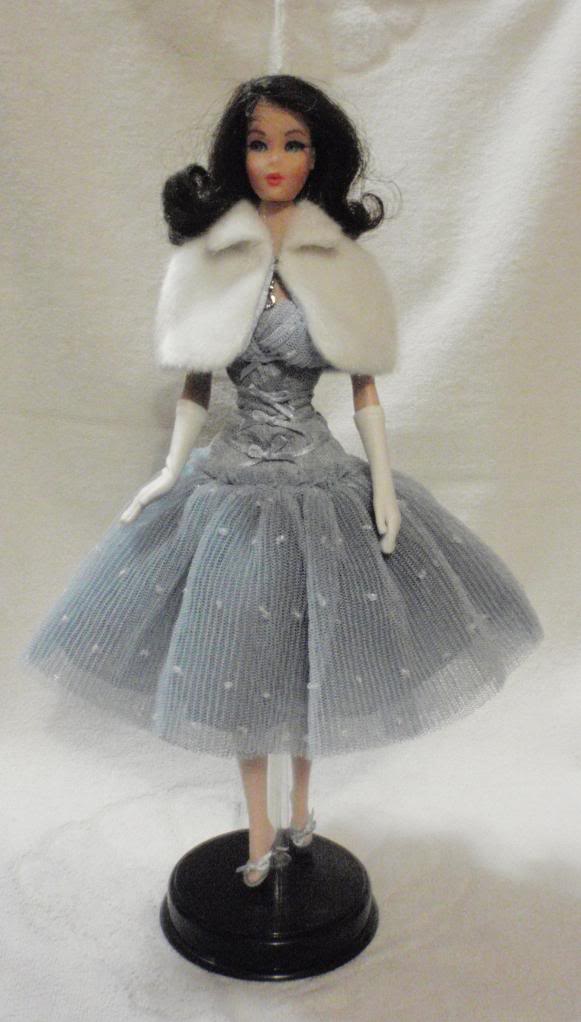 Winter coat made by me- maxi coat with shaped bodice and flared skirt 2012.

Avant Garde Evening at the Gallery
“A Woman Who Thinks” gift set from the Funny Face collection by Integrity Toys/Jason Wu 2013. The shoes are 2010 Christian Louboutin. 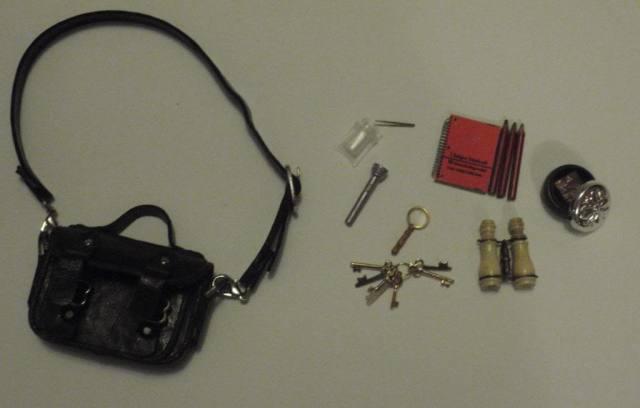 The outfit is not any one year, the skirt is Check-Mates #1259 from 1966 and the headband is made from the jacket belt. The blouse is from American Airlines Stewardess #984 from 1962. The shoes are penny loafers from 1999- “Barbie loves Frank Sinatra” gift set. The sweater is a custom hand made cardigan by Angharad Gruffyd on Etsy and the bag is another custom hand made item from Etsy- made by Naiko. 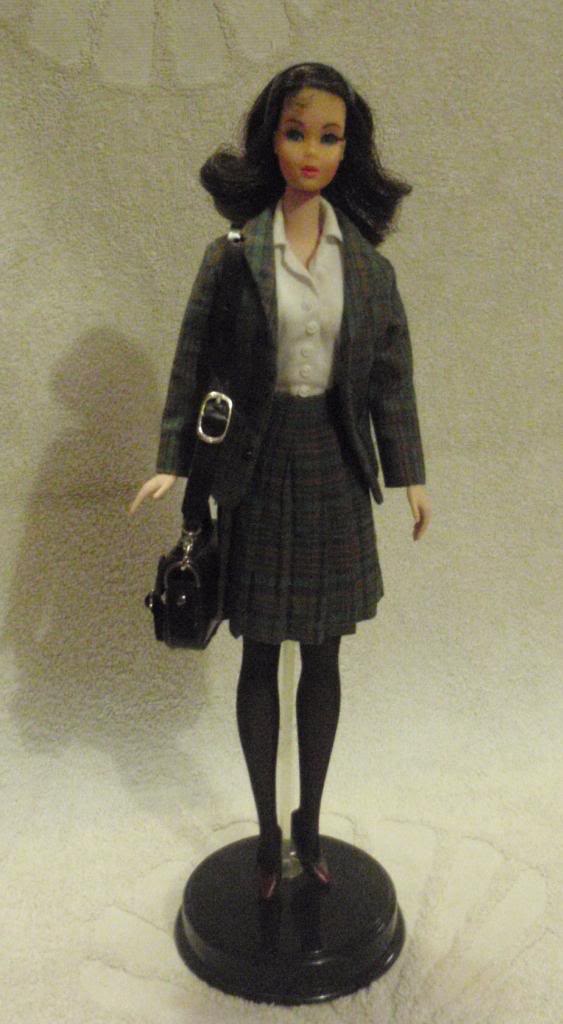 Emily wanted one without the jacket because she said the jacket made her look fat.

College Student
This is a composite outfit. The skirt is a pak skirt from around 1965 (going by the fabric here) and the jacket is Ken’s College Student #1416 (1965). The white blouse is from the Barbie loves Frank Sinatra giftset (1999). The shoes were originally orange (Country Capers #1862 from 1969) that I took a brown magic marker to and the brown hose are from Integrity Toys Barefoot in the Park: Corrie Bratter giftset (2013). The headband is made from a vintage Francie headband covered with the strip of fabric I cut off the jacket to make it the right length.

Co-Ed in Red
This is also a composite. The skirt is International Fair #1653 (1966), the shoes are Francie’s Check Please! (2011) and the beautiful twin set is custom made for Nancy by Angharad Gruffyd on Etsy. I asked her to make a shell to match the cardigan she made for the Nancy Drew outfit but she didn’t have any more of that exact yarn… so she made an entirely new set! Background is “Barbie goes to College” play set (1964).

Turning Leaves
Nancy’s third college outfit- just right for brisk autumn days cycling to campus. The twinset is Sweater Girl #976(1959-1962), the skirt is home made and the shoes are Tangerine Scene #1451 (1970). The bicycle is a Die Cast Road Master Luxury Liner (a Christmas gift from my most awesome

zenkitty_714) and the background is from ebay. I thought it looked like a street of dorms on a campus.

Midnight Mischief
The twinset is Randall Craig 2005 which I had to fix as it came with hooks but no eyes (who does that?) It now has snaps. The skirt is homemade and the shoes are from the Parisian Barbie 2013.

Exam Cram
Randall Craig twinset 2005, unknown plaid skirt (it was with something else I bought on ebay and has no tag at all). The shoes were originally orange (Country Capers #1862 from 1969) that I took a brown magic marker to and the brown hose are from Integrity Toys Barefoot in the Park: Corrie Bratter giftset (2013).

A Good Day for Ducks
Raincoat is Stormy Weather #949 (1964-1965), black rain hat is a Maddie Mod piece from the 60s, boots are 1994 black ice skates from “Victorian Velvet” with the blades removed and the umbrella is new from ACI Toys (yes, it’s a working scale model!) 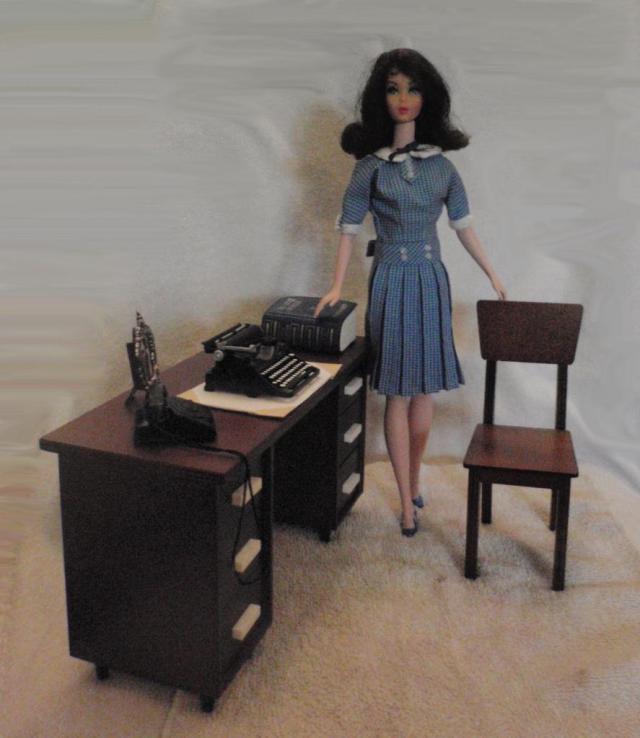 Summer Intern
Dress is made by me in 2014 and the shoes are vintage. The dress is a copy of a 50s dress and was a pure pain to make- I didn’t think I was ever going to get it together! 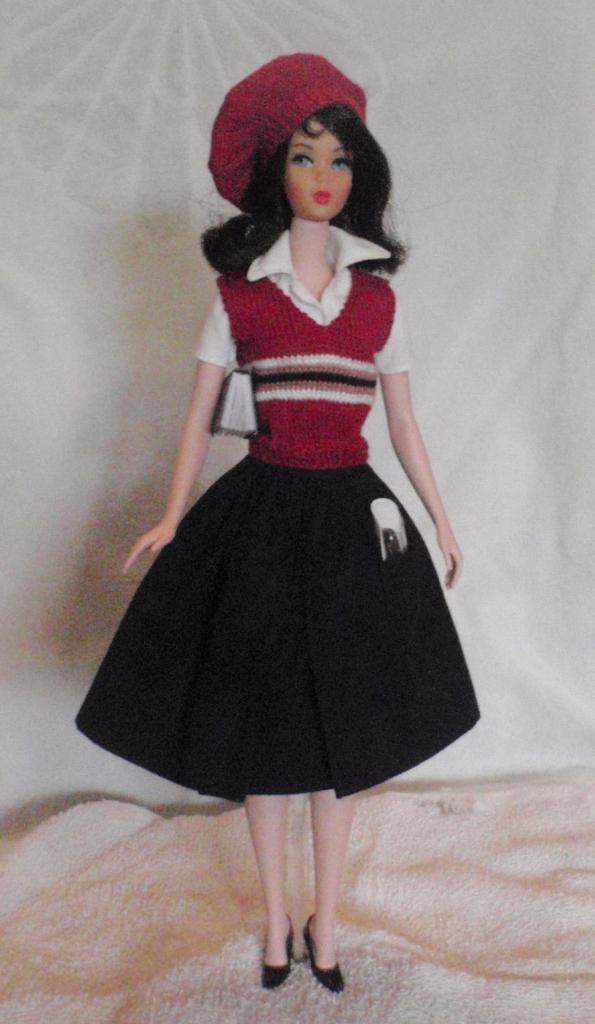 Book Club
The skirt is a pak skirt from around 1965 and the white blouse is from the Barbie loves Frank Sinatra giftset (1999). Shoes are vintage black and the vest and beret were knitted by Ann MacKenzie who is very talented! Her copy for Pride and Prejudice was made by Terrie Wertz at Little Things of Interest on Etsy

This is a copy of the European vintage outfit “Sorbonne” 1679 (1966).
The bodysuit was knitted for me by Ann MacKenzie and the vest and skirt are green silk velvet lined in black satin. The shoes are vintage and the glasses are by Hot Toys for the Silken Floss action figure from the Spirit movie.