Pimping my board games: Rabbit

A bit of history:
A while back, I was wasting time on BGG doing a “If you could only have five games and they all have to start with the same letter” challenge. Being me, I chose the letter R (because Rokoko) and was going through all the games that begin with R when I stumbled across Rabbit. I love rabbits, the art was pretty and the game sounded like it might be fun… plus solo game which mades it more attractive for me. 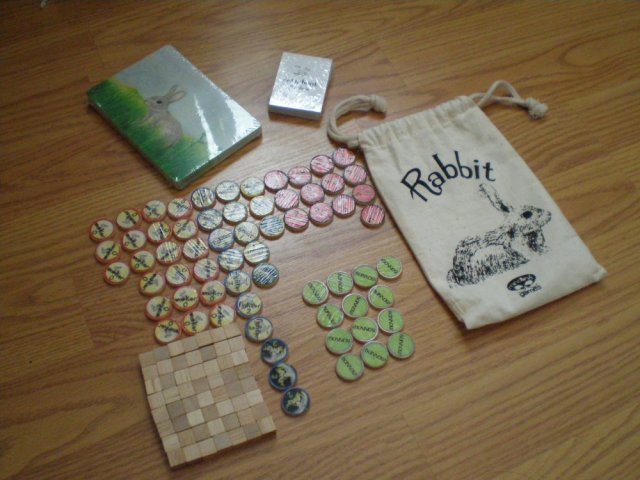 Then I discovered that it was extremely hard to find! The publisher (Mindlink games) seems to be out of business, there are no references to the game other than on BGG that I can find and all the entries on BGG are years old. Plus only 9 people listed it as ‘owned’. Oh, and by the way, searching for a game named ‘Rabbit’ will get you games and rabbits and a few games about rabbits… but it will likely not find you this game. And slogging through a data dump of rabbit games will take days with no actual hits. (Don’t ask- I can be more obsessive than is healthy.)

So fast-forward a couple of months and a charity auction pops up on BGG (they do one every year). Along with it was a wishlist for games you’d like to see listed for you to bid on and I threw Rabbit on there. (Hey, you never know) This brought it back to my attention and I looked at the people who listed it as ‘owned’ to see if it was on anybody’s trade list. Well, no… but one girl had in her profile that she was trying to downsize her collection and if there was something she owned, ask her about it. And she owned Rabbit. So I asked- can’t hurt, the worst she can say is “No”.

But she didn’t. She actually had to find it because she had it stored away- never played- and she was happy to sell it to me for $5. Since that was an awfully reasonable price for a game I really wanted, I included not only shipping but fees for both Paypal and BGG marketplace so she would actually get the whole $5 in her pocket for her trouble. (It didn’t work just like that though. In a fit of awesome, she included a second game from my wishlist: Waldschattenspiel)

The game was unplayed- cards still in shrink wrap- but someone had taken the stickers and affixed them to the wood disks. Since I tend to upgrade things, I planned to get rabbit shaped bits and cabbages for food and shapped bits for the predators… and then I tried to look at the disks. Someone had sensibly varnished them after afixing the stickers… but did not let the varnish cure completely before scooping the disks back into the plastic bag. They were stuck together so badly that pulling them apart caused some of the stickers to tear and/or tear off and several of them were stuck together enough that both pieces were ruined. So it’s either repair or upgrade… and I planned to upgrade anyway.

I found a seller on Etsy (MaddisonCherie ) who had flat wooden rabbit earrings in two sizes and she agreed to sell me 22 large (3/4″) and 6 small (3/8″) rabbits without the backs.
I plan to paint all the kits white and the eyes and pink in the ears and the force number in colour on the flanks of the thinker, the fighters and the scouts and leave the rest a nice wood. I plan to varnish them as well… but I’ll let them dry for a couple of days! 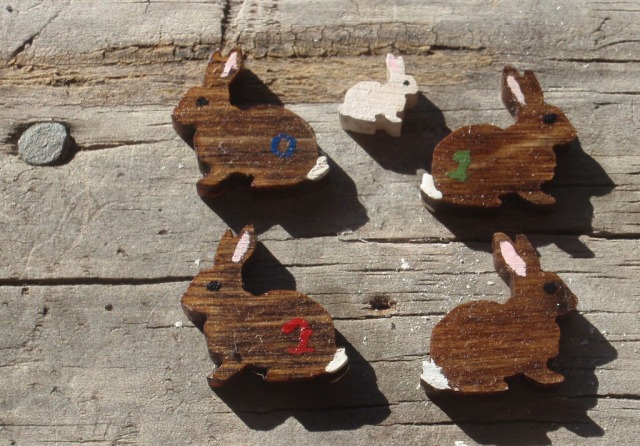 I haven’t quite decided what to do about this. There is a draughts game that has cabbages for checkers and I think I will get one or two of these to use the pieces from them as food bits.

I think I will probably use the Burrow tokens included with the game as they are round and green already and simply mend any that got messed up. 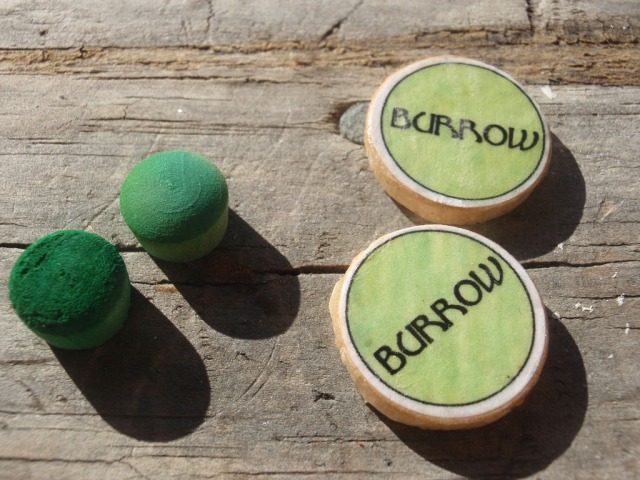 Except for the weasels and snakes, I have found wood cutouts in appropriate sizes (mostly as earrings) on Etsy. The cats are black stained alderwood (1/2″) so all I need to do is paint green eyes on them. The foxes (1/2″) are bamboo so they will need to be stained red and then have eyes, ears and tips painted on. The weasels are 3D printed ferrets (9/16″) because I could not find wood and will have to be completely painted as they are plastic.
Cats by LemonWoodMarket
Foxes by hipandclavicle
Ferrets/Weasels by fuzzbumdesigns

Cards incidence and size:
There are two types of cards in the game, Sun cards and Area cards.

The Sun cards are tiny 44mm X 68mm which I sleeved in Fantasy Flight’s mini Euro sleeves and then trimmed the top of the sleeve down. There are 10 types of Sun cards: 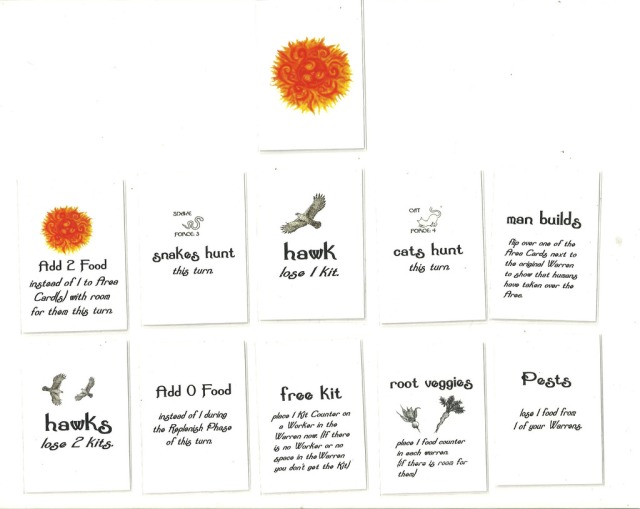 The Area cards are 92mm X 129mm. This is huge for a game and no card sleeves fit except the Magic oversized sleeves… which have the Magic card back printed on one side. I got postcard sleeves and cut them to fit.
There are 18 types of Area cards: 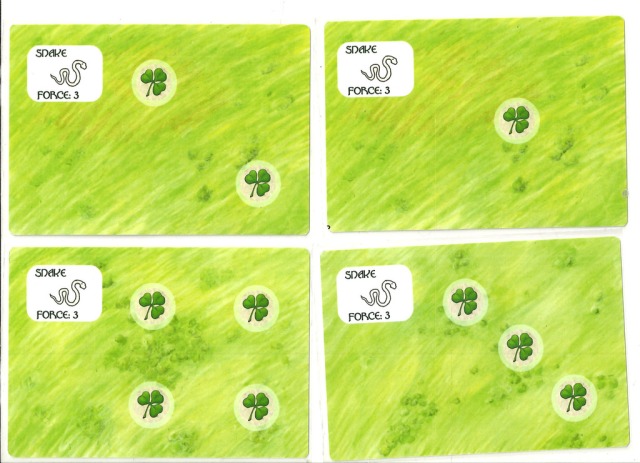 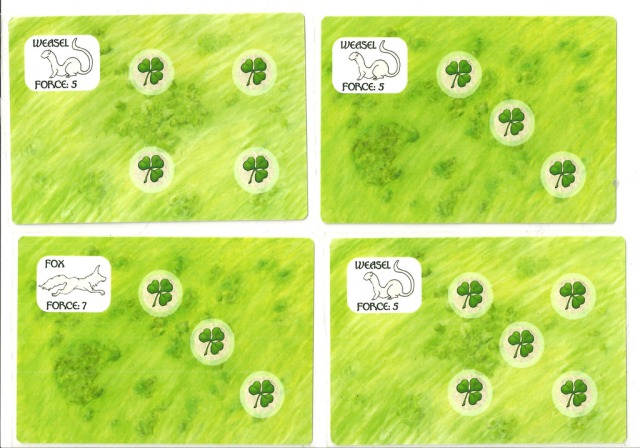 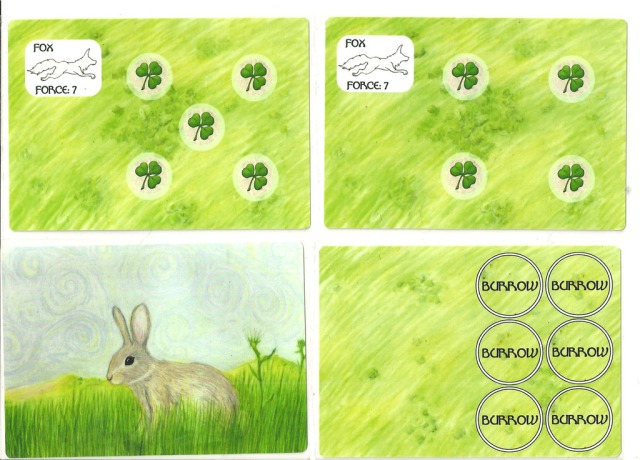 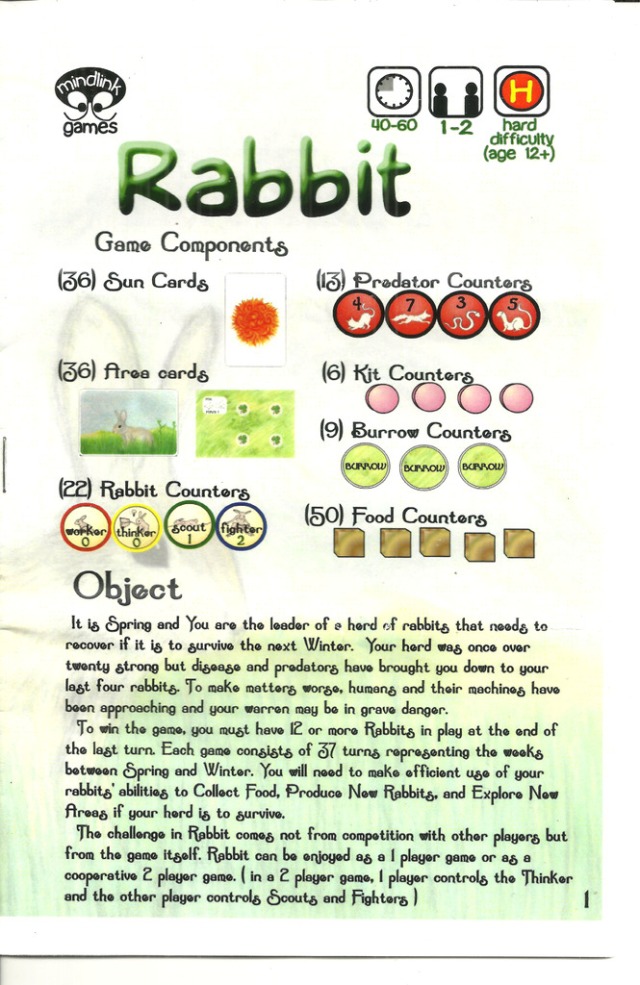 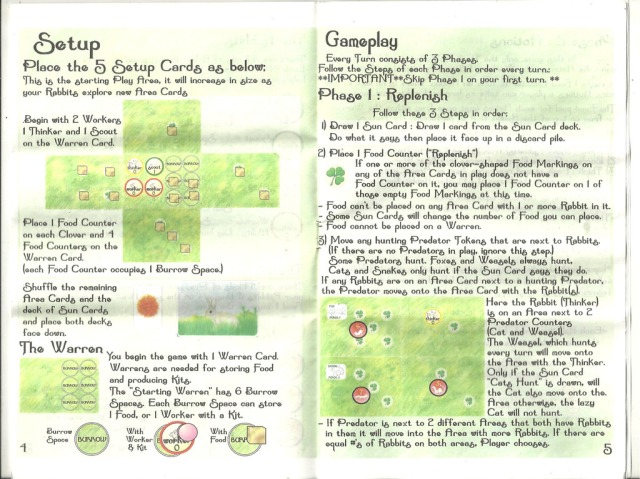 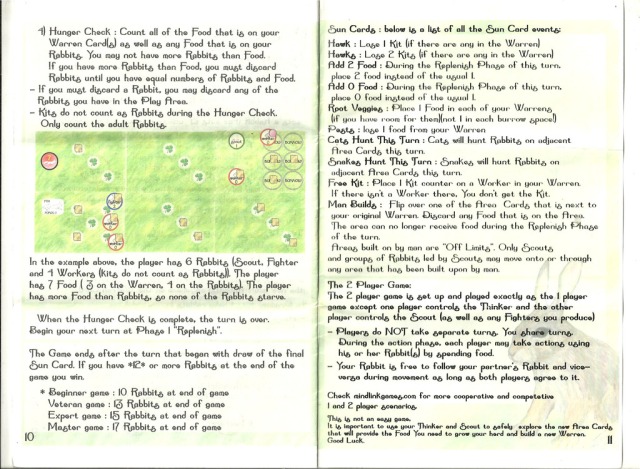 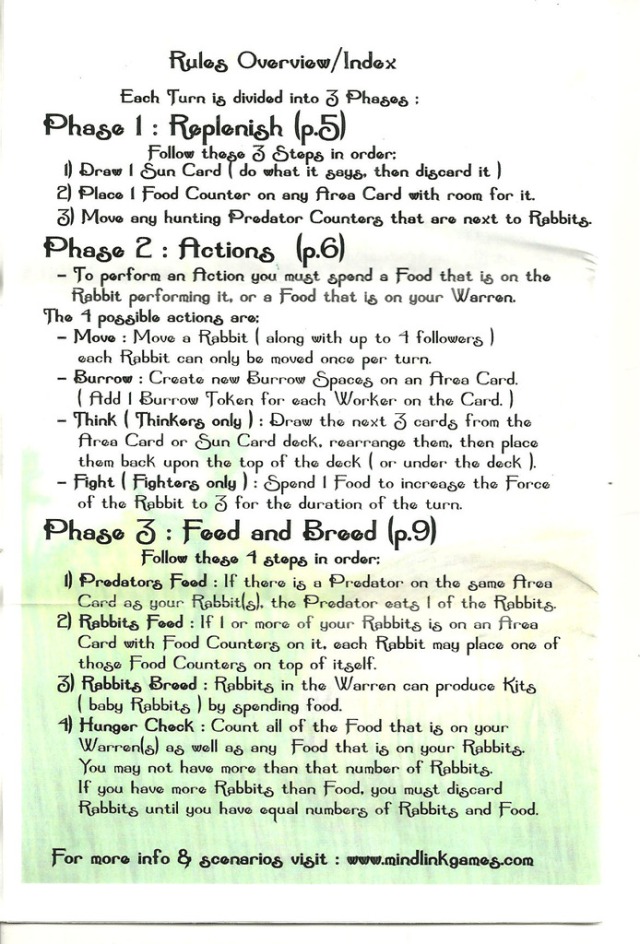 Trivia: A group of rabbits is called a herd or occasionally a fluffle.

11/30/2016
Large rabbits stained and kits painted white. I also painted one side of white on the large rabbits’ tails.

12/6/2016
Inspite of being ill, I painted the rest of the rabbits, stained the other side of the cats and painted eyes on them and sealed everything. I also printed out two ‘burrow’ stickers to replace the two that are damaged and painted the foxes.

Well, I was finished… and then the designer sent me a couple of new scenarios to play!

The first one needs a couple of extra bits to hide the lost rabbits as I can’t flip the rabbit shaped bits. So, where would rabbits hide?

In the bushes, of course! Bought on Etsy from PhoenixFarmFiber- I can’t tell if they would have more of them or not.

The second scenario requires two players and black rabbit bits for at least the thinker, the scouts and the fighters. Also, a second burrow card and more workers would be nice.

So the designer sent me a whole second set of cards with some burrow bits and two black fighters. !!!!!!

This is such wealth that I have to share. I’m going to get three more sets of rabbits, three more cats, two more foxes and four more snakes. Oh, and at least 50 food bits and a box and make a whole second set for my BFF. We’ll both get a set of black rabbits, a set of brown rabbits and all the cards and instructions. I already have the extra weasels, one fox and the bushes because I had to buy more than I needed for my game. 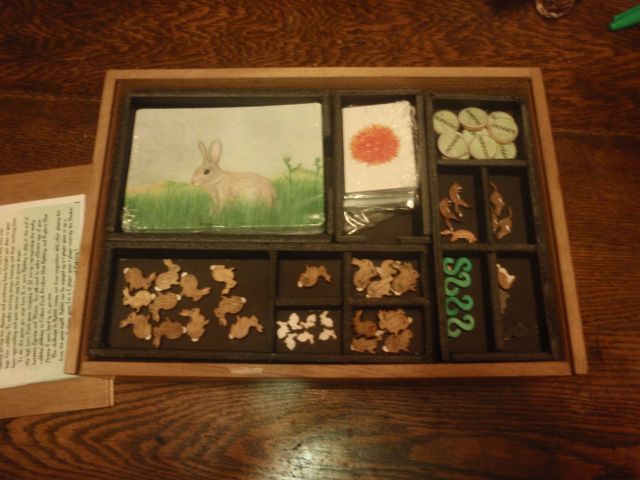 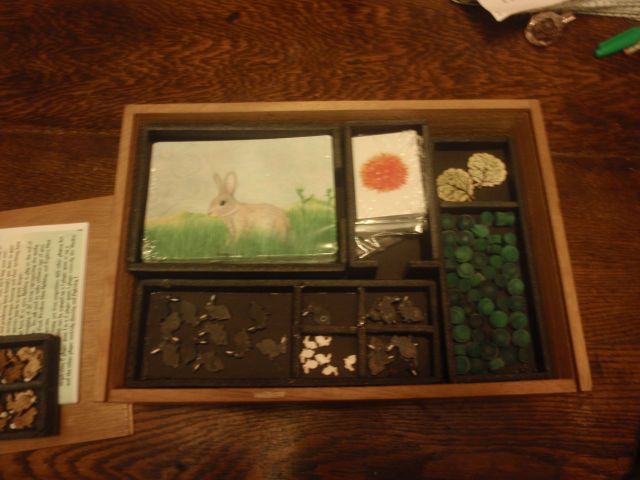 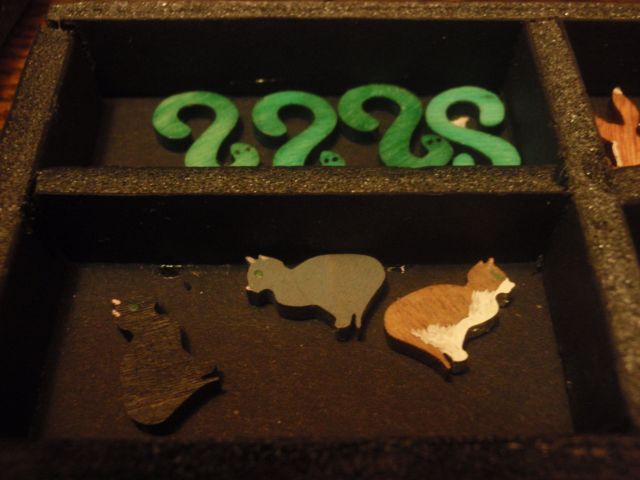 I think hers turned out nicer than mine!